It’s happened to you before. You’re browsing away happily, surfing from one blog to the next, enjoying content that a thousand monkeys typing for a thousand years would have no hope of recreating, when all of a sudden it happens. You come across a site that looks like a blog, calls itself a blog, is for all intents and purposes blog-like in nature… but reads like a paid advertorial on page 3 of your local gossip rag. Something that one monkey could knock up in a casual afternoon quite happily, and still have time for banana or two.

I’m not generally one to bag other people out, but it’s got to a point where I think something needs to be said, because it annoys me when the spirit of blogging and the organic dissemination of information is treated with such calculating disdain.

Such is the world of “Celebrity” Chef, Benjamin Christie, and his attempts to boost his own celebrity status by manufacturing hype. This takes the form of his blog, his Wikipedia entry about himself and his tv show, written by himself, and his frequent unsolicited emails asking me and others in the food blogging community for links and to visit his website, complete with web bugs and statistics tracking links built in (note the actual link address in image). 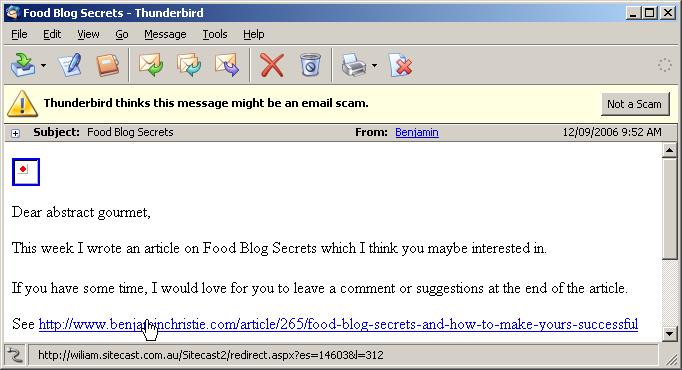 It’s no surprise why these kinds of sites exist. The Internet is an important part of our social consciousness these days. People rely on it for news, entertainment, and community, with blogs forming a large chunk of that world. It makes sense that where the people go…so the advertisers go. Everyone knows that you have to be online now if you want to capture that highly prized share of the market.

So why does this grate me so much ? Benjamin Christie has done a number of things. He’s appeared in a TV series and published a book (or had a hand it at some point), and from what I can gather (from reading his own publicity material) travels around the world as an ambassador for Australian native food. These are all good things… but that doesn’t make him a celebrity…

The blogging community is not stupid. We are normal people, with normal lives, who choose to congregate around each other websites in order to share ideas and receive inspiration. If you want to join in, feel free… Just don’t use your blog as a thinly veiled marketing ploy for all of your other products. If you do so, don’t call it a blog, call it a marketing portal. A self contained world where you are the most famous person in the world and everything else thinks so too.

Doing a number of searches online, you find it really difficult to find anything about him, that wasn’t either written directly by him (or one of his “team”), or posted as an advertisement for his various wares. Now I have no problem with commercialism. I have no problem with people getting paid for what they do. What I have a problem with are advertisements disguised as journalism, and with someone trying to hijack the food blogging community for their own marketing purposes.

The beauty of blogs is that they are written by real people. Ideas are shared freely and the comments you receive are taken on board and evolved into a new understanding of food, wine, or whatever you happen to be writing about. The best blogs have evolved over time through the authors writing great content that people want to read, and through actively commenting and encouraging others.

As soon as you start to try and change the course of public opinion through surreptitious ways, you start treading a very fine line between raising awareness and outright spam, and the nature of blogging itself takes a sharp and painful twist back to the days of media companies telling us what we should think.

To me it all seems like the emperors new clothes in blog form:

I think it’s time for Benjamin Christie to put his pants back on… because no-one wants to see it.

** Update **
Another article by Ed from Tomato about Mr Christie and his advice.
Responses to Ed’s post on Food Blog S’cool
A bit of history on the situation as pointed out by Sam from Becks & Posh

*** Update II ***
After some creative but accurate editions to BC’s wikipedia entry by Ed, the page was promptly reverted to it’s original glowing praise version. The IP address used to make that change, was incidentally used to visit my website recently, referred via one of his stats pages. The world is full of strange coincidences it seems…